Yesterday only the Groningen soil stirred. Today Groningen is no longer alone.

Here I hope to inform you regularly about the reorientation of the civilian airport of Den Helder. Since 2016 I have been able to assist the management in guiding the airport through the energy transition. A wonderfully beautiful but above all extremely exciting assignment with many “cliffhangers”, which I would like you to witness regularly from this place.

And no, MAX Q has nothing to do with Max Verstappen's impressive performance. Although Max also flies (low) there is no further relevant aviation link. No, the MAX Q condition is the point at which a spacecraft's atmospheric flight reaches maximum dynamic pressure. Only through very careful flight control can this point be passed safely and the vessel and her crew preserved. I thought this was an apt title because the climatic conditions that are important for the maintenance of our fragile ecosystem are located on MAX Q. Only a very careful global energy transition will take us past this point. No one will be able to escape the effects of this transition and the airport has also been dealing with it since 2015.

But in this first column I would like to dwell a little longer on the influence that the energy transition has on all of us, before discussing the effects on offshore aviation in the North Sea in the following columns.

Let's first talk about the transition from fossil fuels to fully sustainable forms of energy in 2050. This therefore arises from the agreements to allow the earth to warm up no more than 1.5 degrees compared to the pre-industrial era. This is due to the limitation of CO2 emissions, as laid down in the climate agreements of Paris COP-21 and recently shaken up again during COP-26 in Glasgow. Not that our planet couldn't handle this little man-made warming. Compared to the sun that she will encounter in 7 billion years, it is peanuts. No, the ridiculously fragile ecosystem in which we thrive as a species is under threat. And that is why this action is necessary in order to be able to get our temporary lease as a kind of extension.

The energy transition consists of a package of ambitions that is coordinated at both European and global level. In the Netherlands, part of this is laid down in the Climate Act. So far, the results of all this have lagged far behind these plans and ambitions, as has been noted again recently in Glasgow. And each time this happens, the goals become even more ambitious than they already were; in the Netherlands from the original 30% CO2 reduction in 2030, to 40% reduction. In the EU even from 40 to 55% reduction in 2030! And they want to achieve this by pricing, setting goals and drawing up regulations. Again, no lack of ambition. But I don't see a plan of implementation yet.

The Netherlands also aspires to a leading role in the world. However, the Dutch contribution to the CO2 problem worldwide is 0.23%. In other words: if the judge could force tomorrow that the Netherlands could neutralize all its emissions, that would have a modest effect. That leadership would therefore translate better into a global approach, where the resources of one country can be used in another to achieve a much greater effect than the first-mentioned country itself produces. Allowing the Netherlands to run on natural gas for a little longer and first helping other countries get rid of heavier fuels, such as oil and coal, will have a greater impact on the climate than by switching from gas here first. A kind of willingness to sacrifice, through which great disasters were successfully averted earlier in history. But we don't seem willing to do that in the least. Everyone in the Netherlands is of course in favor of measures that should ensure a better climate. Just preferably not in my backyard, preferably no biomass, no nuclear energy, no wind on land, no large solar parks and certainly no oil or gas and otherwise a bit of pace please. Do not touch my car, flying holiday or home. And of course any form of taxation is out of the question. Give Kok that quarter back first. Well, of course we'll never get there.

The effects that the energy transition will have on all of us cannot be underestimated enough. You recently found out about the spectacular rise in the gas price, which no one saw coming. I hope you have a permanent contract. At the same time, we must be careful not to overestimate our own abilities and possibilities. Everything that has been accomplished since the industrial revolution: our freedom, security, comfort and economy are currently largely powered by fossil energy. Fossil energy is intertwined with every fiber of our existence. This unraveling and replacing it with another system requires a bizarrely well-thought-out plan, as can be concluded from the attached graph. And I don't see that plan yet. 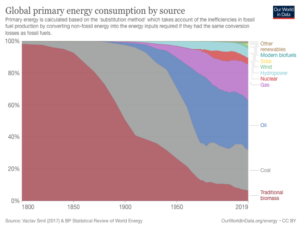 It is of course not my intention to talk you into the pit with these columns. Or to determine that we don't have to do anything at all, because the problem is not with us. Of course not. But it is important to interpret this trend in order to be able to establish a relationship with the barriers that we as citizens encounter when we need to change our energy consumption.

We are well on the way with the roll-out of renewable energy, but “getting off gas tomorrow” is pure nonsense. It would be better if politicians were less concerned with their daily rate or popularity score and jointly roll out a transition path up to 2050. We have again heard loudly (and sometimes clearly) what they want, also recently in Glasgow. But there is still too much uncertainty about how to get there. Until then, shocks to the energy system, also in Groningen, may be the norm rather than the exception.